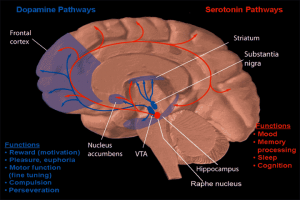 Did you know that there is a crucial link between dopamine and restless leg syndrome? Most experts are now in agreement on this. I can almost hear you saying, “But what exactly does that mean? And please don’t confuse me with fancy medical terms.” There have been so many new discoveries just in the past couple of years on what causes RLS. Let’s dive into these latest findings.

To put it as direct as possible, experts are finding that people suffering from RLS have issues not with the amount of dopamine being produced, but with their dopamine receptors functioning properly. So no matter how much dopamine the body produces, it’s just not being utilized.

Dopamine is known as the “feel good chemical,” and is responsible for critical tasks such as combating   stress, relaxing the nerves, ensuring proper movement of the limbs, maintaining memory and restful sleep. So, you can see why it’s critical for RLS issues.

When the body is producing more dopamine (or you are taking dopamine enhancing drugs) and the receptors aren’t receiving it properly, a build-up of dopamine happens in the brain, causing nervous tics and, yes – you guessed it – RLS.

However, it’s important to note that just taking more iron isn’t going to solve the problem. In fact, it could end up causing RLS symptoms to flare up even more.

A majority of the recent studies being done on what causes RLS have found that an overwhelming number of people suffering from RLS have low ferritin iron storage protein levels in the brain1. It’s here, in the substantia nigra that iron is able to be utilized to assist in dopamine neurotransmitter activity.

Probiotics, such as the ones being used in Seratame for restless legs, are one of the keys to aiding the body in being able to utilize iron more effectively.

In the next part of our “Puzzle” series, we will be looking at why iron and probiotics are the next crucial pieces to the dopamine receptor issue. Although experts are still putting together the clues for what causes RLS, there is now more than enough evidence pointing to the dopamine connection that they now know they are going in the right direction. For more info on this and other tips on uprooting restless leg syndrome, have a look at our latest articles or download our free ebook.